“I made six sales during #InstaBizWeek (& I hadn’t really started my business yet!)”

As a single Dad who had been forced to moved due to a family breakdown, Mike wanted to learn to cook healthier meals for his young children. And what better way, than to start a YouTube show with his young son?

But when it came to monetising the show and creating a product off the back of it, he wasn’t sure whether Instagram was the place he needed to be or not. Just a few days on the #InstaBizWeek challenge convinced him it absolutely was.

What is Cooking with Cody?

Cooking with Cody started as a family YouTube channel. But Mike has always had lots of business ideas in his head. Ranging from a MasterChef-style venue where families can come and relax while their children cook the lunch, to helping homeless people learn to cook, complete with a double decker bus kitted out with a kitchen.

These were exciting dreams, but Mike realised he needed to start a little simpler and try to bring some money in if he wanted to move towards these bigger goals.

So, a friend suggested meal kits. 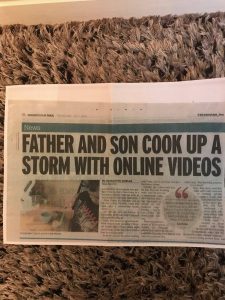 He experimented for a while and then settled on pizza kits that would allow parents who were nervous about cooking from scratch to make pizza with the kids without having to shop for all the ingredients individually. The Cooking with Cody pizza kits were designed to include the dough, tomato sauce, cheese and customisable toppings, with clear instructions for making and cooking. Best of all they are cheap, so they’re perfect for people just like Mike. Single parents who want to entertain the kids for an hour, teach their kids some basic cooking skills and put a nutritious meal on the table.

Since the pizza kits, Mike has introduced other products and tightened up his mission to ‘tackle childhood obesity and hunger in Torbay through cooking education’.

And his Double Decker Diner is taking shape nicely too.

What did Mike hope to get from #InstaBizWeek?

When Mike joined #InstaBizWeek the first time around, at the beginning of 2020, he really wasn’t looking for much other than to learn everything he could to get started in business. He had set up an Instagram account previously, with about 20 friends following and just didn’t think it could work for him as well as Facebook, on which he’d been getting lots of interest in his videos.

But despite only completing the first three days of the challenge, he saw immediately how useful the platform could be, and he enjoyed Kimba’s teaching styles. So he vowed to revisit the challenge when he had a product to promote.

In the summer, the opportunity came.

By this time, Mike had been advertising his pizza kits with some success during lockdown, but as Covid restrictions began to loosen up customer numbers dwindled.

So he signed up for #InstaBizWeek for the second time hoping to learn how to use the platform to increase his audience.

What were his biggest learnings?

Perhaps the quickest and most important lesson Mike learned was the importance of his ideal customer. “I was doing it to help blokes like me, but targeting single dads in the area would give me about five customers. So instead, I realised there are many more single mums. So instead of just shouting, ‘come and buy pizza kits’, I learned to direct stuff to those people who would most likely use it.” This led to the enormous ideal client sketch that Mike now hangs above his workspace to remind him. And it enabled him to update his website to reflect his newfound knowledge too.

Mike soon realised that he could use Instagram very differently to how he was using Facebook, zeroing in on his target audience and selling “the one particular thing they would fall in love with”. Helping to grow an engaged audience so they would be more likely to buy from him both now and in the future. The work he did on perfecting his bio during #InstaBizWeek was a big part of this as well.

Participating in the challenge also helped him realise how important it was to share his story. “I had been sharing pictures of what we were up to on Facebook, but never really talked about where it had all come from. So when I did my introduction post on Instagram I finally told the real story behind the business, I talked about the fact we’d been homeless for six weeks and the domestic abuse I’d suffered. It got an amazing response. Before that I was ashamed of it, I felt like a failing dad, but the more people I spoke to the more I realised they could relate. And so instead of just another food business popping up it became a healing process and something other people could be a part of.”

He began to successfully seek out direct conversations with his ideal clients.

And what results has he seen?

Arguably the most impressive part of Mike’s IBW journey was the fact that despite not really being ready to sell in earnest, he took 6 orders almost immediately after starting. As he put it, “it felt like at one point every time I looked at my phone, I had a new Stripe payment notification.”

Thanks to the challenge, Mike reported an increase of 250 new targeted followers and 20 new repeat customers through Instagram.

New visitors to his website went up about 300%, and by the end of the year he reported selling at least one kit a day.

All of which enabled him to put profits into the areas of charity and education in which he so desperately wanted to make a difference.  Including competitions and live giveaways of kits to deserving children and local heroes. And he’s featured on an impressive number of local media outlets too.

He’s also become a lot more confident on Instagram lives – despite initially having reservations about knowing people were watching as he spoke to the camera. “I used to want to edit all of my videos to make them beautiful, but then one day Kimba dropped coffee all over her keyboard during a live and I realised that videos should just be natural and help people get to know you, they definitely don’t need to be perfect!”

[Yeah, thanks for that Mike!]

““If you’re considering #InstaBizWeek but you’re not sure, sign up now. Just do it. It’s a free course for a week and it WILL make your business more successful on Instagram. The time spent doing the tasks, if that’s what you’re worried about, is minimal. Especially when you compare it to the time you’ll spend making sales later on. It’s just a no brainer.”

If you’d like to find out more about Mike’s story, see what he’s up to now or connect with him on Instagram, you’ll find him at @cookwithcody.

Note: Mike’s pizza kits can no longer be bought, as he’s busy with his dream and the double decker bus!

“Because we have done so well, we have stopped selling the pizza kits down because we are well underway building the double decker cookery school and I just don’t have the time. I now have a team of 64 people which include business, contractors, suppliers and people who are helping with the build. Literally, it all started with these kits.”

Want to find out if you can get similar results to Mike?